Flood of Losses, Mountain of Riches

The ping of a text message drilled into my ear. I was drifting along a wave of dreams, enjoying the sounds of morning gradually overtake my mountain house—the summer insects, the birds, the drip, drip from last night’s rain. If I answered the text, I would have to open my eyes and pick up the phone on my nightstand. I would have to leave the comfortable grey space between wake and sleep.

I rolled over and reached for my phone, patting the surface of the night stand until I touched it.

“Waters continue to rise. Can’t see the top of my car now.”

Dale was a friend down the street from me in St. Louis—over six hundred miles away from my perch in the mountains of North Carolina.

What kind of game was he playing? It was barely 5:00 in the morning there. He never texted that early.

Whatever joke it was, I didn’t find it funny. I put the phone back on the bedside table and tried to tuck back into my dream.

I sat up in bed and grabbed the phone off the stand, feeling a tad annoyed.

This time the scene in the photo he sent was vaguely familiar. It was a shot of the street from a high vantage point facing from Dale’s house up to mine, half a block away. Only, it did not look like a street. It was a lake.

“The neighborhood is sinking! Will have more information when the sun comes up.”

“Good thing you have a canoe,” I quipped, trying to join the game.

“If it hasn’t washed away. The water looks like it’s made it to your house.”

“Send a photo, please,” I challenged, beginning to feel nervous.

Finally understanding that Dale wasn’t kidding, I texted my next door neighbors and they confirmed the worst, sending me photos of my backyard under water. 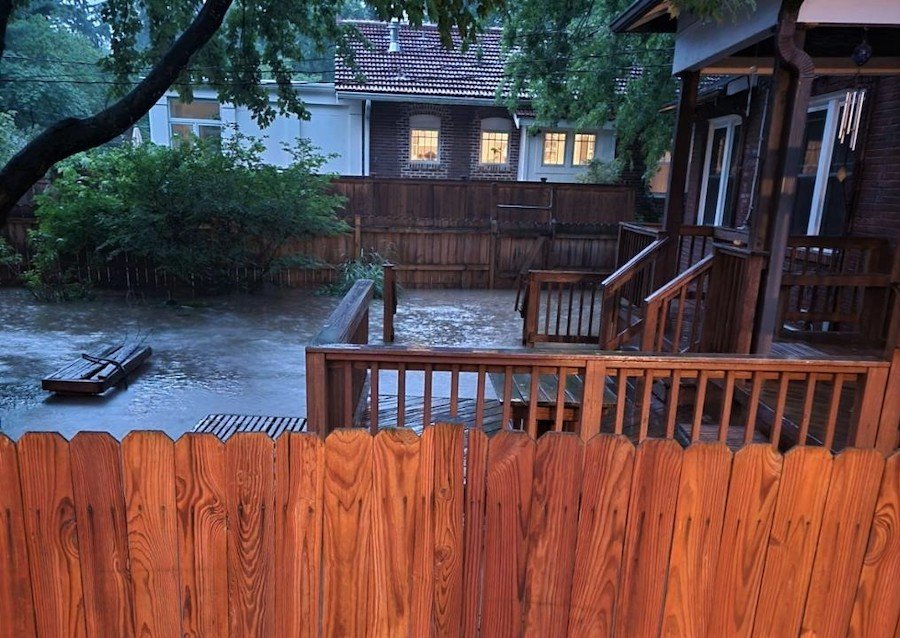 I made plans to return to St. Louis the following day, allowing myself time to close down my mountain house.

The drive was excruciating. The whole way I tortured myself with visions of loss—all eleven hours through Tennessee, Kentucky, and Illinois—imagining the worst. Why didn’t I have the proper insurance?

Why hadn’t I been more careful?

I would come to understand that no one not in a flood zone had flood insurance. There was little I could have done to protect my house. Of course, I could have stored all my books and photos on the second floor. But, space in those tiny closets was limited, and how could I have imagined over six feet of water in a basement that had never had so much as a trickle. It was inconceivable.

Iva called when I was only a few minutes from St. Louis. She was awaiting my arrival. How did she know when I would get there? I hadn’t told her of my departure or ETA. But there she was with a large aluminum pan of burek—a delicious Bosnian pastry she introduced me to earlier—and a bottle of wine. How did she know I would not have access to a stove, that the gas had been disconnected? How did she know I needed her then more than ever?

She walked with me into the basement.

I don’t think I could have handled it by myself.

The carpet on the stairs squished under foot and smelled horrible. The hallway was dank. The water had receded, but we could see the water line on the walls just inches from my first floor. I had been lucky.

Dale’s first floor had been completely submerged. He had texted me from his attic.

My washing machine was turned sideways. The massive wooden work benches that had been in the house when I’d bought it thirty years ago had been tossed across the floor. One now tilted perilously.

Outdoor plants had been washed indoors. My backdoor was gone.

Books, papers, tools, blankets, the contents of my pantry, the contents of my utility chest, all were strewn about the floor of the basement and covered in muck. I learned that the flood had begun as backup through the drains—sewage—and then was met with the press of mounting water outside.

It had rained nine inches in the space of a few hours, twelve inches in some areas. The ground was hard and dry and unable to accommodate the deluge. The sewers were old and clogged and incapable of carrying away the downfall. Within hours, while most of my neighbors slept, our houses filled with water.
One family, upon waking to the sound of their basement windows crashing under the weight of the flood, waded out into the torrent—mother, father, adult children, family dog—and pressed forward in chest-high water until they reached higher ground. A relative picked them up and carried them to safety.

Dale told me of another neighbor who tried to do the same and was on the brink of being swept away when a quick-thinking man, watching the storm from his porch, threw him a rope—a literal lifeline.
Not everyone was as lucky. The flood claimed two lives in the St. Louis area.

When Iva left, I unpacked my car and ate the feast she’d brought, charting my course of attack. Although my living space had been spared from the rising waters, the smells of the basement rose to the second floor, enveloping me, invading my dreams as I tried to sleep. I felt I was trapped in a sewer. In a few days I would no longer notice the smell. It would surprise me when outsiders to my neighborhood would remark on the odor, stating they could smell it blocks away.

When day broke I pulled on the old hiking pants I wear for yard work. I grabbed the rubber gloves under the kitchen sink and began hauling away the detritus of my life. My neighbors had suggested it was important to get as much of the wet material out before mold set in.

The extra packs of toilet paper and paper towels were so waterlogged, they were too heavy for me to lift. I concentrated on the smaller things, like the old store-bought quilts I’d neatly stored in my cedar closet. I never used them. I had long planned to give them away. Now they were ruined.

There was the wedding dress I had worn once on June 21, 1980. I don’t know why I had saved it. None of my nieces would have wanted it. But there it was, soaked in mud, along with my wedding pictures.

The plastic bins in the cupboard were filled with water, their contents ruined.

I had heard, though, that if you kept the photographs wet, you could eventually dry them. Some papers could be restored by freezing them. I found a bin of my father’s sermons, some hand-written. They had miraculously escaped the waters. I rushed them to the freezer just to be sure, taking comfort in his familiar scrawl.

And so it went.

My friend Laura had told me to call a professional clean-up and mold remediation service when I first told her of the disaster, while I was still in North Carolina.

“Call them now!” she insisted. “Get on the list. They’re going to be backed up.”

I called. She was right. I was put on a waiting list.

The company sent a crew to my house on Friday. I arranged for them to also attend to my neighbor’s place. Between the two of us, we shared a dumpster along with our trauma.

As I sat on my deck peeling photographs off damp album pages, I heard my neighbor telling the cleaning crew about the items they were dragging from his basement.

I could hear the pain in his voice. There were his grandfather’s books, his father’s tools, and his high school yearbooks. He had always assumed they would be with him forever.

Our cleaning crew was from Hawai’i, though most of the members were Samoan. The crew down the street was from Oklahoma. Another crew had come from Kansas. From house to house the shouts from the crews resounded with different accents.

In a way, it was like a big block party. All my neighbors were in their yards. We called to each other as we made trips from our basements to the dumpsters. We shared, we commiserated, we even managed to laugh.

After my first day of cleaning, a professor at my university contacted me by email. We don’t know each other well, but we exchange pleasantries when we meet on campus. She had heard from Iva about my house. She wondered if I needed anything.

Within the hour she was at my house with a bag full of prepared foods—ratatouille, rice, bread, fruit, another bottle of wine!

I had told Nancy I was aggrieved to have discovered I had no coffee in the house the morning after I returned home. All that cleaning on no caffeine made me tempted to turn to the unopened bag of Kaldi’s coffee I found in the basement pantry. It had floated through the debris. Maybe it wasn’t ruined? That afternoon I found a new (clean) bag of coffee on my front porch!

Even a former boyfriend resurfaced when he learned of my plight and offered to help me clean. By then I had paid in advance for the professional crew and was instructed to stay out of the basement until they arrived. Undeterred, he ran out and purchased a large floor fan to blow the foul odor away from the house. I was touched by his sincerity.

And so, there was a flood in my basement. I lost everything. Not just the personal things, the carriers of memories. I lost mechanical things, too, the hot water heater, the boiler, the electrical panel.

The mechanics are easy to replace but expensive. The personal things are not worth much but are irreplaceable.

I also gained a new awareness of the deep way people care for each other—people I had never expected to notice me came forward with wonderful gestures of kindness. I received what I needed when I needed it most.

I am, through the trauma of loss, far richer than when I started.