“I have a kimono that my Uncle brought back from Japan at the end of World War II, as a gift to my mother. I’m wondering if you might be interested in it?”

I received an email with this message shortly after my university’s online magazine ran an article on my kimono collection. A member of the Washington University community named Janice had read the article and decided her mother’s kimono would be better served in my collection than in her closet.

“I would love to give it to you, if you’re interested. I used to wear it occasionally, but for the most part, it has been in the closet for many years.”

She followed up this email with a second:

I was intrigued. And, as I’ve noted in an earlier post, I feel kimonos (and other garments that have enwrapped the body) contain glimmers of that person’s energy. I agreed to meet Janice at her house in Webster Groves, Missouri for the handoff.

Over the weeks, as I awaited a mutually convenient time to visit Janice, I wondered about her uncle. When had he been in Japan?

What must it have been like for his little sister to watch her brother leave for war? He was her only brother. Surely, her heart swelled with pride just as it shrank with fear. She must have thought of him often while he was away. Did she send him letters?

When he returned, Janice told me, Uncle Emery brought back “two kimonos and black silk pajamas from Japan, wooden shoes with carvings in the heels from the Philippines, and two baseballs signed by the team players (we think from teams formed by the soldiers who were in the Army together). He gave them all to my mom.”

Janice had the kimono packed in a bag when I arrived. We exchanged pleasantries. I didn’t want to pull the kimono out then and there—it might seem I was evaluating the piece rather than merely accepting the gift. Janice was being generous, and I didn’t want to detain her. I thanked her. Assured her the kimono would be treasured, placed the bag gently in the back seat of my car and headed home.

Driving the seven short miles back from Webster Groves, I tried to imagine what kind of kimono a twenty-eight-year-old man would bring his sixteen-year-old sister. I expected it to be bright and soft, perhaps something he had picked up at one of the inevitable tourist shops outside the military base.

When I took the bag inside and pulled the kimono out, I was surprised. This was no made-for-tourists kimono. In fact, at one time it had been a formal garment. Black crepe, with crests on the breast, sleeves and shoulder of the “eight-petal-cherry-blossom,” and a design only at the hem, the kimono conformed to the “tomesode” category. It would have been worn by a married woman and only on a formal occasion such as a wedding. 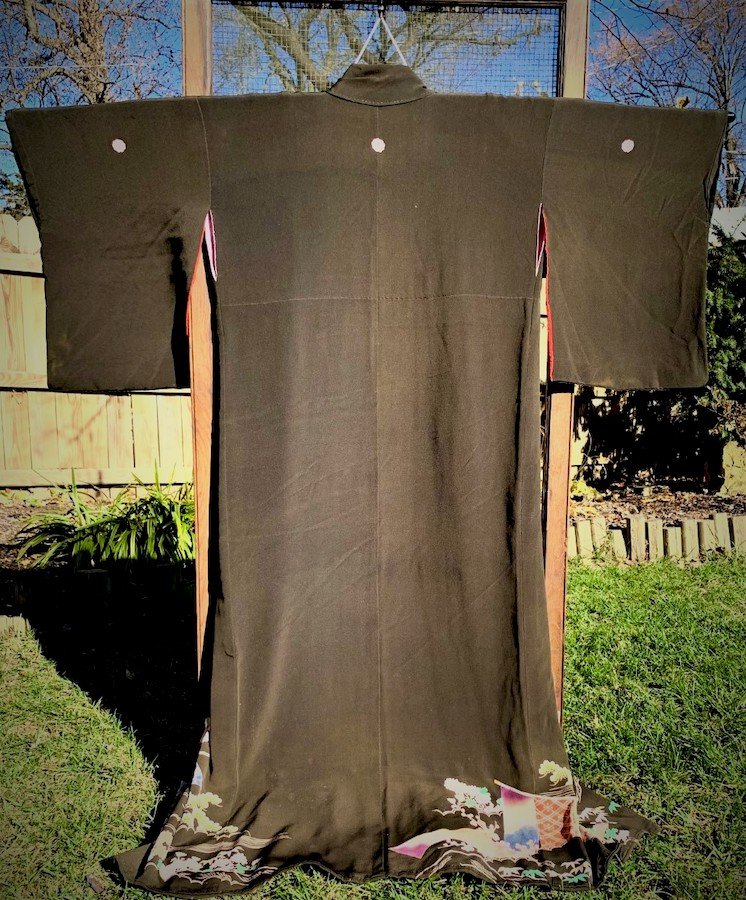 As kimonos go, it was rather sedate, dyed along the hem in subtle colors of pinks and greens. There were the pine boughs, plum blossoms, and bamboo fronds—the triumvirate of festive botanicals—interspersed with the elegant fabric stands and room-divider screens suggestive of the Heian court.

Where had Emery acquired this kimono? Had he purchased it at a secondhand market, as I have done so frequently in Japan? In the immediate aftermath of the war, desperate people would have bartered away their possessions in exchange for food. I wondered if this kimono had belonged to a recently-widowed woman, now no longer in need of family celebrations.

How had Emery’s little sister received the kimono? Had she wondered about the fluttering sleeves? Had she tied the garment tightly around her waist, imagining herself a little Japanese doll? Did she twirl and pose like the woman in Claude Monet’s La Japonaise?

“As far as I know,” Janice would later email me in response to my questions, “my mom would have worn the kimono as a robe over pajamas. I don’t think she wore it outside the home.”

The kimono is discolored now. The inner sleeve is torn. The lining is speckled brown with age. However she wore the kimono, Emery’s little sister had enjoyed it.

Janice’s sister inherited the other kimono. Apparently, she gave it away years ago.

“I wore the silk pajamas as a child, and so did at least one of my daughters, and I passed them on to someone else for a costume. Our daughter is a baseball fan and has the balls. I still have the Filipino shoes.”

I collected the kimono from Janice in June of 2021. Last fall, when the humidity abated, I hung it on a stand in my garden to air it out. Before the night dew fell, I took it back inside and folded it carefully, as my dance teacher had taught me, paying special attention to the collar.

I smoothed out the wrinkles as best I could and placed the kimono inside a soft washi-paper wrapping designed especially for kimono. Next, I stored it away in the Japanese kiri-tansu, or paulownia chest, that I had ordered from an antique shop in San Francisco. Paulownia, like cedar, naturally protects against insects.

From a war-ravaged Japan to a young woman’s chest of costumes in America, the kimono has journeyed from one cultural context to another. Once it marked a married woman’s place in family celebrations. With a shift in time, the kimono transitioned too, carrying with it a brother’s love for a little sister. With each move the meaning of the garment changed as well and it became a playful referent to its original context.

“You have traveled far, little kimono. I do not know your story, but I know you’ve been loved.”