Winning by Losing: Why I Enjoyed Running Races in Japan

Japan is a great place to run races. People are generally supportive of runners and racers and are eager to cheer even the slowest on the field.

Years ago, when I lived in Mitaka, Tokyo, I ran a lot of short-distance road races. Inspired by the encouragement of the crowds, I eventually decided to try a triathlon. I ran a few sprint-length events in the Shōwa Memorial Park outside Tokyo.

I actually medaled. Kind of. 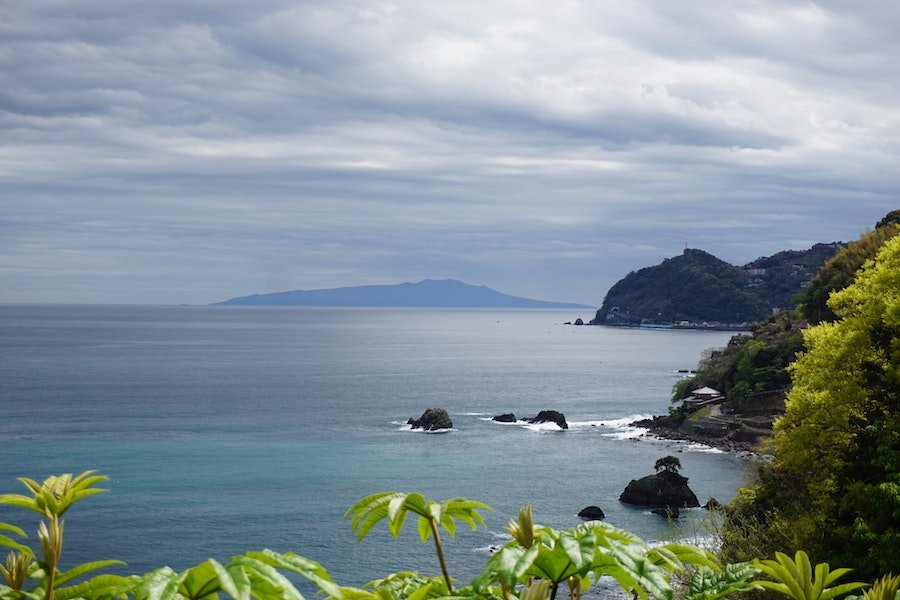 I took the ferry to Ōshima from Tokyo the day before the race and checked into a local inn. Almost all the race participants did the same. The triathlon start was early the next morning.

Shortly after arrival on Ōshima, the race officials had a meeting with all the participants to explain the rules and the course. I remember a young man—a boy really—from New Zealand asking me if I understood what was being said.

When I said that I did, he asked me questions about the course. I hadn’t listened with the kind of care needed to give him the answers he sought.

“What if I’m leading the crowd,” he replied.

“You’re competitive?” I asked with some astonishment.

I found one of the race officials and helped the future winner with the questions he had.

The next morning I ran into him near the start of the swim, and that’s the last I saw of him.

The 1.5km swim was intense. I’d competed in outdoor pools but never in open water. All the entrants were required to wear a wet suit. Since I didn’t have one, I borrowed one from a man in Tokyo who was about a head shorter than me and foot wider. 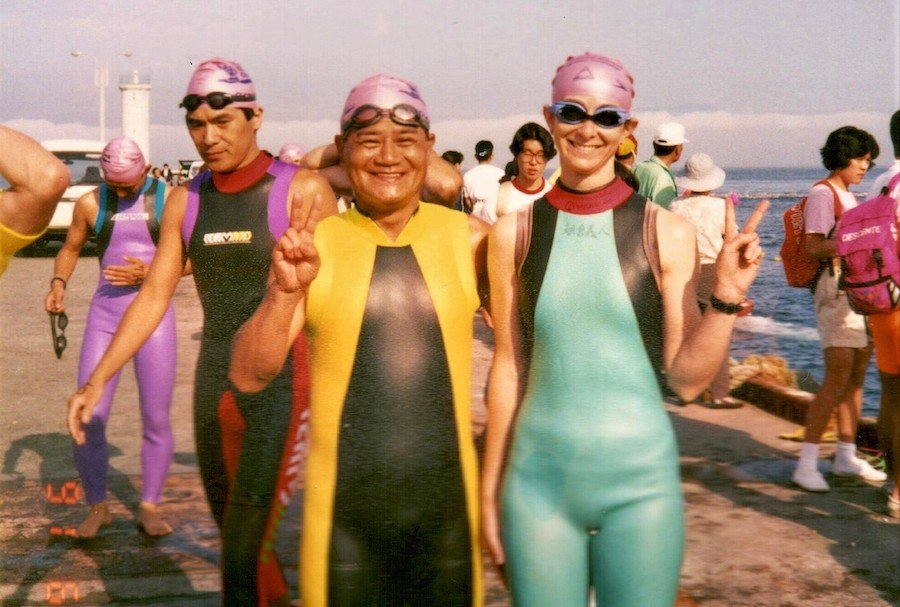 Awaiting the start of the swim in my ill-fitting wetsuit. 9 June 1991. Author’s photograph.

During the swim, faster athletes swam right over the slower ones. Since I was in the latter category, I spent a lot of time underwater trying to find space to come up for air.

I’d been told to expect the churning, but found the physical contact with other swimmers exhausting, even a little terrifying at times.

I was relieved to reach the end of the swim, only to discover I had to clamber up onto a dock instead of racing onto the beach.

The line to climb the ladder was so backed up, eager competitors started scrambling up onto the pier from the choppy waves below. I tried, but the crotch in my wet suit had slipped to my knees, preventing me from pulling my legs up. I was stuck clinging to the pilings while others behind me used my body as their impromptu ladder, climbing up and over me—and ON me.

Finally, two of the race officials grabbed me by the arms and hoisted me onto the dock. Off I went to my bike, as fast as I could with my knees swaddled in neoprene. 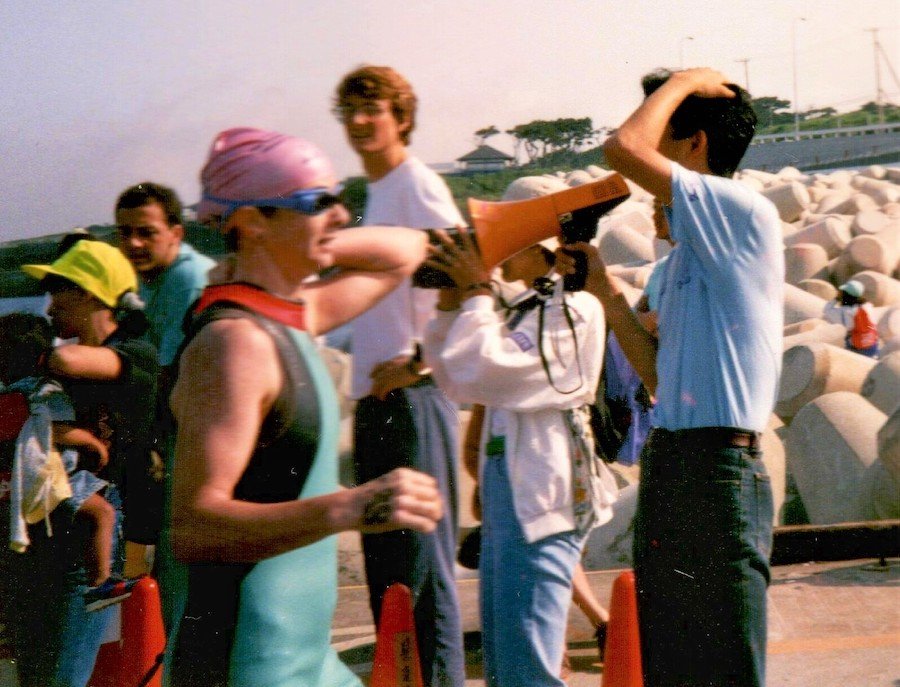 The bike was my strong event and I sailed up the mountain roads, careening along the curves, passing many who had swum over me.

In preparing for the race I had biked every weekend along the mountain roads outside the Yokota Airbase, where I had friends and biking buddies. It didn’t take us long to leave the base and reach the countryside.

Often we’d encounter professional keirin track-bike racers training for their Tachikawa Velodrome bouts. Even though they had only one fixed gear, or so we were told, they worked their way up the same steep slopes almost as quickly as we did. The bikers had thighs as thick as tree trunks. 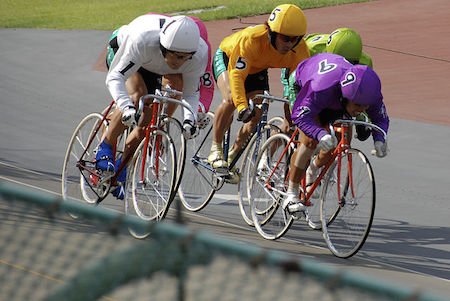 Keirin racers sprinting to the finish line in the last lap on the Omiya velodrome in the Tokyo metropolitan area. Credit: Paulkeller, Wikimedia Commons.

We could pass them on the incline. But once we hit the flats they outpaced us in no time—riding tight behind their pace car.
The experience of racing the keirin bikers, helped me with 40km leg of the Ōshima triathlon. Sadly, the ground I made up on the bike, I lost on the run. My calves started to cramp after 3km. I had to hobble the rest of the 7km in something akin to agony.

But the spectators were glorious—cheering me on. The runners who passed me, too, offered words of encouragement.

One reason I loved running races in Japan so much was just this kind of comradery. I was not a competitive runner. I was ippan 一般—ordinary! And the ordinary runner is beloved for their very ordinariness.

By the end of the race I had befriended a number of women who were equally ordinary. We found one another in the grassy field where the award ceremony was held and feasted on the free food while we watched the winners take their bow.

The Kiwi boy came in first.

After the competitive runners were acknowledged and rewarded, the announcers shifted to the ippan runners. They went by sex and age group.

Just when I was midway through my second onigiri, I heard them calling my name over the loudspeaker: Rebekka Kopurando

I had not expected that. I hobbled to the stage amongst the cheers of my new friends and their friends and almost everyone else on the field. (The Kiwi and I were just about the only non-Japanese in the race that day.)

I’d come in sixth in my age group.

The ferry ride back to Tokyo was full of laughter and fun.

I wish I could say the story ended there. But it didn’t.

After reaching my apartment in Mitaka, regaling all my friends with my great honor, and assigning a space on my bookshelf for my trophy, I received a letter from the Japanese National Triathlon Association.

They had made a mistake. I was seventh, not sixth, and would I return my trophy at my earliest convenience.

My friends were furious for me. Why couldn’t they just let you keep the trophy; they could order another one for the real sixth-place ordinary woman?

“Keep it!” some encouraged me.

But no. The trophy was tainted now.

I sent it back.

Later I learned that the boy I met from New Zealand, Cameron Brown, earned his way onto the Japanese team, Epson, and raced every summer in Japan for about seven years. He won his first Ironman New Zealand in 2001. He won his twelfth in 2016 at the age of 43.

And me? I may have lost the trophy, but I won a story.

My story still makes me laugh each time I tell it. 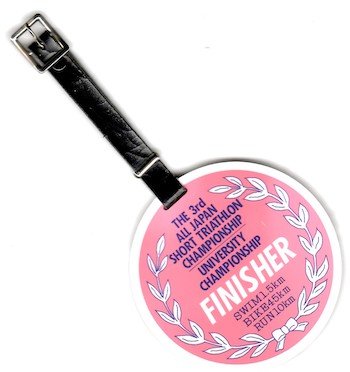