Home is Where the Views Are

I can’t remember when I decided I would retire to North Carolina. The idea came on gradually. Maybe it was after I spent that month in the Tennessee cabin writing the first draft of The Kimono Tattoo. It was only a month, but I felt such an affinity for the hillsides and vistas there. The late afternoons on the rough-hewn porch watching the sun set; the morning rambles over the old logging trails with my dog, Wilson. I found myself communing with my parents and with the person I wanted to be.

It was the perfect escape from the world outside. The political battles between Romney and Obama were heating up. Fundamentalists had taken over the government in Egypt and death tolls continued to rise in Afghanistan and Syria. Back at the university, there were hirings and firings to deal with, new programs, old programs, and reports to write. But none of that mattered much as I stoked the fire in the wood-burning stove, coaxing warmth into the darkening room.

During the following summers, when I wasn’t in Japan, I would visit my brother in Boone, NC. While he traveled to different music festivals, I’d stay with his dogs. Watching the sun slip behind the rim of Grandfather Mountain, I knew I belonged in the Blue Ridge.

It’s not that I was unhappy in the Show-Me State. I’ve lived here for over thirty years. Longer than I’ve lived anywhere in my life. I’m comfortable here I love my house and garden. I may bicker a bit about campus politics, but all in all, my work at Washington University has been fulfilling.

Still, St. Louis is not my home. It never has been.

And so, I decided—while I was still a decade or so from retiring—I would find my retirement home in the Blue Ridge. I would plan ahead. I would start now. Even I was surprised by my certainty.

Daily, almost hourly, I scoured the real estate listings on line, putting electronic hearts on the property I wanted to see. My own heart would break a bit when the property disappeared before I could find the time to drive back to North Carolina.

My brother helped me engage a realtor, and I began making trips to Boone as often as possible to look at property. Fall break, spring break, summer break, I drove with my realtor from house to house, never finding what I wanted.

Shortly after classes ended in May 2018 I saw a house on one of the listings. It looked like a contender. I was more partial to contemporary architectural styles than I was to the rustic. Log cabins seem to prefer the country look with quilts and pie safes and such. Contemporary vibes suited my Japanese décor better.

This house was eight-sided, with wall-to-wall windows. The interior was bright and airy with exposed beams rising high into a vaulted ceiling. I arranged to drive to NC in May and Billy, the realtor, put the house on our tour schedule. First he took me to a number of other listings. They were each okay for a short stay, but not at all what I wanted for my forever house.

And then we visited the eight-sided contemporary. I thought the exterior was kind of ugly, frankly. It had a greenish shingle siding and little to no landscaping. But once we walked inside, the exterior hardly mattered. What mattered were the views. And the house was nothing but views.
The kitchen was nice, the bath was fine. But the open living room faced east out over Jefferson, North Carolina with a clear line to Mount Jefferson, Big Phoenix, Little Phoenix, Paddy Mountain, and beyond in layer after layer of shimmering purple and blue ridges.

“What do you think?” Billy asked.

“I could stand here all day.” 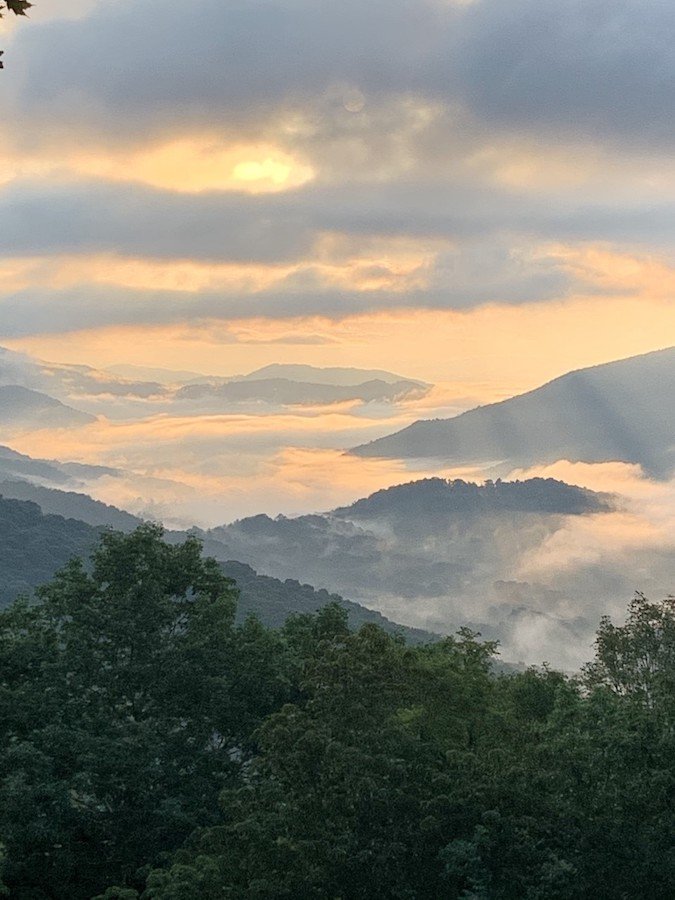 I hated to turn from the window, but we had another viewing in Lansing. I told Billy I didn’t need to see more. He had made an appointment, though, and the owner was expecting us. He wanted to honor his commitment, so off we went to see a house that was chock-a-block with knick-knacks and country frills and so boxed in I felt I could hardly breathe. We left as soon as we could do so politely, promising the owner we’d be in touch if we had further questions. I knew we would not.

Billy dropped me at my brother’s house.

“Find anything?” Luke asked, rather hopefully, when he returned from work.

“I may have. I’d really like you to see it, though. Do you think you might have time tomorrow or….”

It was nearing six o’clock. I knew Luke was tired and ready to melt into the couch with a beer and the latest episode of NYBD Blue. We’d been binge watching the show for some time.

Eager to tell him about my find, I explained the location.

I worried about the construction on Highway 221. When Billy and I drove out to the house earlier, it had taken considerable time. If we left now, wouldn’t it be too dark by the time we got there?

He took a dirt road that wended its way down to the New River and then followed it for a number of miles. We hardly met any other car. Luke put a Lucinda Williams CD on and we rolled the windows down enjoying the mild breeze blowing through the pines. Frogs were singing in the marshy lowlands and the setting sun tinted the surrounding hills a soft mauve. I held my hand out the window and surfed the wind—up and down, up and down—as Lucinda Williams sang about heartbreak.

My heart was full. 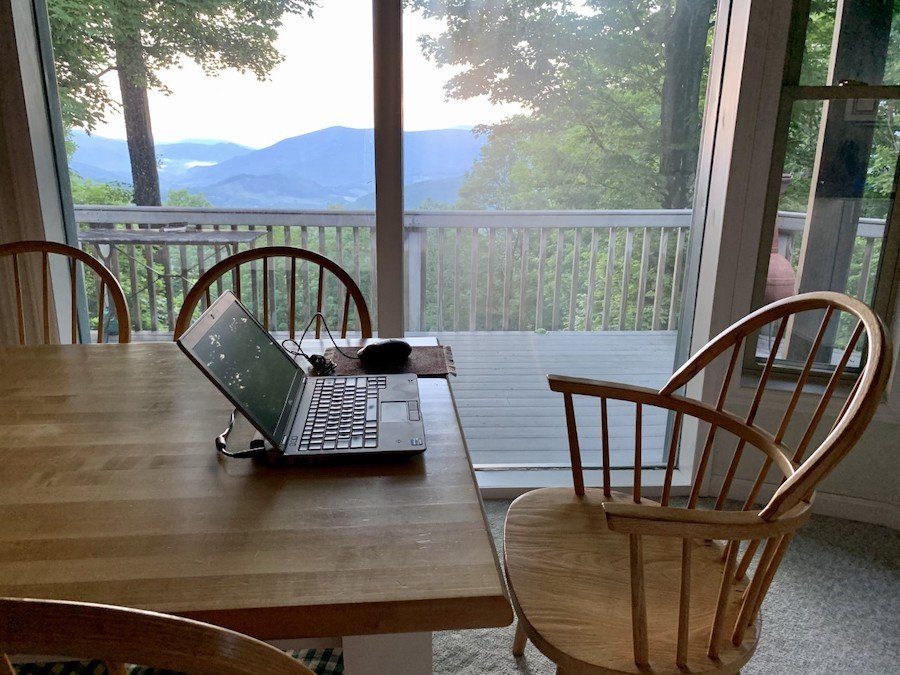 Something about that moment, the frogs, the pines, the rush of the river, my brother singing along, and I knew I was home.

Once Luke saw the house, he confirmed my hunch.

“This is a great house, Beck!”

I still feel like I can stand here all day, basking in the beauty of the views. Now, all I have to do is retire… 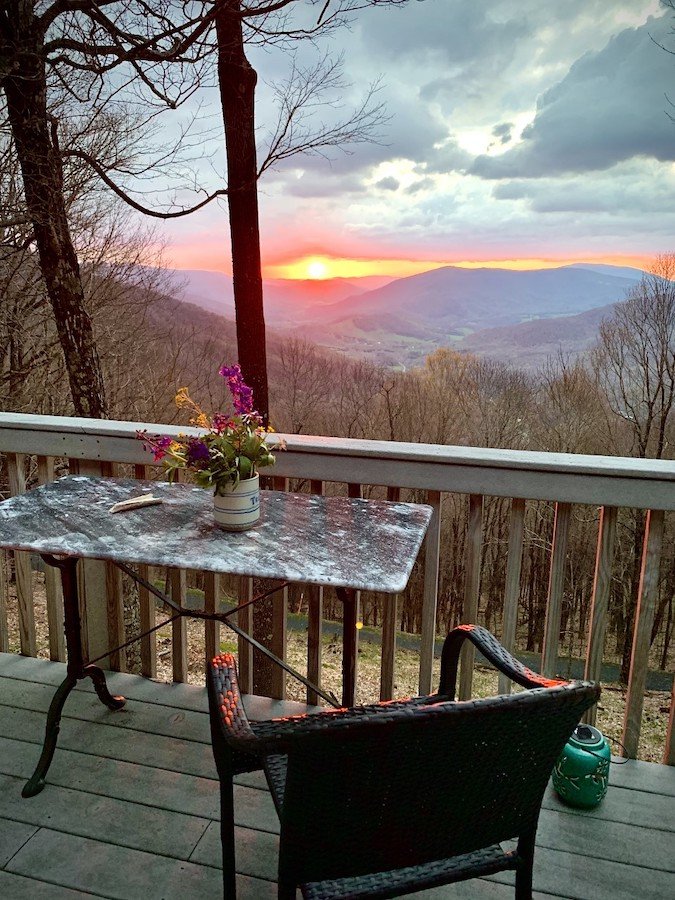