Nuns Fret Not: My Life in Manhattan

I often feel I could live anywhere. When I was seven my family spent a year in India, and I loved it. For college I relocated to the Sandhills of North Carolina. Only a two-hour drive from my home in Raleigh, still the landscape was different, with long-leaf pines, brackish ponds, and sandspurs. I loved it. And then in graduate school I spent five years in New York City, a world away from pines and ponds and everything I understood.

Although by then I’d spent time in Varanasi, India and Fukuoka, Japan—buffeted by crowds and unfamiliar languages—New York struck me as more foreign by far. I was in the United States, so I shouldn’t have felt like an outsider, and yet I did. And I didn’t mind.

On days when I needed a break from my studies, I enjoyed strolling the sidewalks, gazing into the shop windows, vicariously sampling as I passed flavors and fragrances from around the world. I liked to tell my friends back home that New York was the cheapest place I’d ever lived. I didn’t have to pay a thing for entertainment! I just walked the streets and absorbed the sights and smells for free. 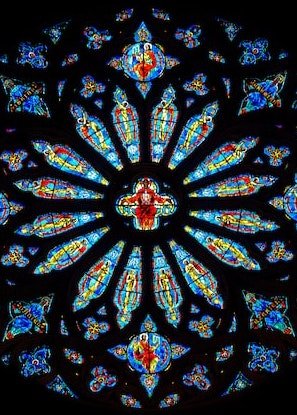 Occasionally I walked into St. John the Divine on Amsterdam and tiptoed along the massive granite columns, smooth and cool to the touch. The light streaming through the stained glass windows painted my skin, my hair, my book bag mauve and turquoise.

When I wanted to splurge I’d buy a knish or falafel from one of the sidewalk carts and carry it down to Riverside Park for a quick picnic before walking as far as the George Washington Bridge.

I remembered driving over that bridge on my journey up to New York from North Carolina ahead of the fall semester. Watching Manhattan sweep past the girders, I could feel my pulse quicken. The city’s energy was palpable. I was excited and terrified all at once.

I had almost no money.

The North Carolina College Fund had given me a loan but it barely covered my tuition. The bulk of the money I’d raised over the summer working three jobs—one for the state, one for a bar, and one for a pizza delivery—paid for dormitory fees. I stayed in Johnson Hall on Amsterdam and 116th Street.

My room was tiny, smaller even than the closet in my childhood home, the one where I relocated the planet Mars. When I first stepped into the space, I was crestfallen, uncertain I could survive in such cramped quarters. But it did not take long for me to adjust. The room had a window, a closet, a sink, and just enough space for a desk, single bed, and bookshelf. I spread an Indian-print fabric over the bed, hung a Japanese ukiyo-e calendar on the wall, and I was home.

There was a cafeteria on the first floor, but I only went there once. I felt so awkward trying to figure out the system—what to select, where to pay, and with whom to eat. I saw the woman who lived across the hall from me standing on line and tried to strike up a conversation with her. She was from Cuba and very stylish. She just stared at me when I spoke, her immaculately painted lips curling into a sneer as she eyed my handmade cotton skirt. I heard her giggle with the woman next to her when I carried my tray to another table. Late at night she and that woman would sit in the hallway speaking animatedly in Spanish and cackling. Once, when I had an exam the following morning and was desperate to sleep, I cracked the door open and politely asked them to take their conversation to the lounge. It only made them louder.

I ended up eating most of my meals in my room. I guess you could call them meals. We were not allowed to have a hot plate or toaster oven, but an electric kettle was okay. I had a five-cup Regal Poly Hot-Pot and used it to warm coffee in the morning and soup at night. I lived on Campbell’s tomato soup. It had been my comfort food as a child. 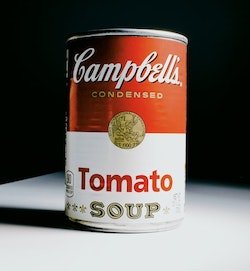 I made foraging runs to the small supermarket a few blocks from my dorm when my stock ran low and loaded up on instant coffee, crackers, and as many cans of soup I could carry. I made do with powdered milk (for the soup and the coffee) until the weather turned cool and I could chill a small container of milk on the sill outside my window. I stored yoghurt there as well, and cream cheese. I had recently discovered the paradise of bagels. My nightly meal consisted of tomato soup, crackers, and a piece of fruit. Occasionally, I mixed things up with vegetable soup.

My room faced Morningside Park, where we were told to never venture. It was too dangerous. From the corner of my window I could just glimpse the Columbia University faculty club with its white table cloths and dark-suited waiters. I wondered what they were eating. I could imagine the click of fork tines on the plates, the murmured conversations, and the soft chords of a piano playing somewhere in the background.

Midway through my first year, I discovered that elderly women (faculty wives, no doubt) served tea and cookies in Philosophy Hall, next to Kent Hall where I had all my classes. There was no charge. This fare became my lunch.

When I celebrated something, a successful exam perhaps, I would stop by the local deli and get a pastrami on rye with an extra pickle to go. I’d rush back to my room, curl up on my bed (where I ate all my meals—facing the window) and slowly savor the unfamiliar flavors. One sandwich was enough for two meals.

Now and then Wordsworth’s sonnet, “Nuns Fret Not at Their Convent’s Narrow Room,” would spring to mind, and I’d smile in agreement. My room was hardly the “pensive citadel” his students enjoyed, but I was happy in it. I could come and go as I pleased, and with the exception of a few “mean girls,” I lived life undisturbed—scrimping mostly, splurging occasionally, studying always. My days were routine, but nearly every day was different. Some were difficult, many were bright. And at the end of each, I had my own narrow room as refuge, my familiar Indian-print bedspread and ukiyo-e calendar welcoming me back.

My life in Johnson Hall unfolded long before personal computers became ubiquitous to college life. I had no television, no stereo, just my books, my portable Smith Corona electric typewriter, my soup, and my window. And from that narrow space, I had the world at my feet. An hour’s walk along Broadway would take me to Little Italy for a cannoli and a cup of cappuccino. Thirty minutes more and I was in Chinatown. If I traveled back on the IRT line, I’d slip into conversations between Haitians, Puerto Ricans, or Nigerians. I traveled the world for the cost of a subway token.

I left the dormitory when I married. The apartment in the Bronx where I lived with my husband looked out over Van Cortland Park and was spacious by comparison.

Even so, I still fondly recall my nest on the seventh floor of Johnson Hall every time I enjoy a bowl of tomato soup.